Posted on 2011-08-03 by Philippe Faes
Tagged as: case statementempty rangelintingVHDL

Sigasi Lint performs static analysis for VHDL code in order to find VHDL code lint. The built in VHDL linter will issue warning when you use certain suspicious VHDL constructions. While your code does not violate the VHDL syntax, there might be a problem with your code.

The first lint check will flag a warning if you add others at the bottom of your case statement (with a state of enumeration type) when you don’t really need it. 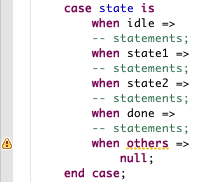 In VHDL, you need to cover all possible cases in a case statement. For a simple enumeration type, this is easy. For a std_logic_vector, you would usually omit all the meta-value (like "UUUU") and cover these cases in the final choice: others. If you intend to cover all options (like in a state machine with an enumeration type) it is best to make this explicit, by not adding the unneeded others. Years from now, somebody might come along and change your code: add a state to the enumeration type or remove choices from your case statement. If they make a mistake, they will get an error message from their VHDL compiler. If you have added others to the end of your list, the VHDL compiler will accept the new (and probably incorrect) code of your colleague. That is why you don’t want the others choice at the bottom of your case statement.

In VHDL, you can use ranges with to and downto. But, if you use the wrong direction, you get an empty range, which is usually not what you want: 7 downto 0 is a range of eight. 7 to 0 is an null range. We have a lint check that warns about this, even if you use constants (or some simple arithmetic).

There are more lint rules available, and we can implement your coding rules in Sigasi Lint for you.