Posted on 2013-06-19 by Philippe Faes
Tagged as: Code generationRegister mappingVHDL

In many projects, some of the VHDL code is generated in one way or another. For instance, many projects manage their register map in one master file and generate their VHDL packages and C headers using some kind of tool (either commercial or an in house script).

This article deals with integrating such a script in the Sigasi Pro development environment, so that your generated files are always up to date. In order to make it easy for you to reproduce this, we have created a demo project that you can download or clone from Github. The demo project already contains a working “Builder” that runs the generator script each time you change the values in the script.

But first: this video shows you what it looks like in real life. As soon as I change the generator script (and save), the generated code is updated.

We assume that you have the project, and a script that generates VHDL code (or C header files, or any other source code).

Running it by hand

First, run the script by hand, so that you have one set of your generated files.

Marking the generate files as “derived”

Next, for each of the generate files, right-click > Properties then select Derived. If you have a lot of generated files, and they are nicely placed in a single directory, you can instead mark that directory as derived.

Set up the Builder

The tools needs to know when to trigger this builder, so we have to give it a little more information:

After the extra files are generated, we want the rest of the build process to use our newly generated files: 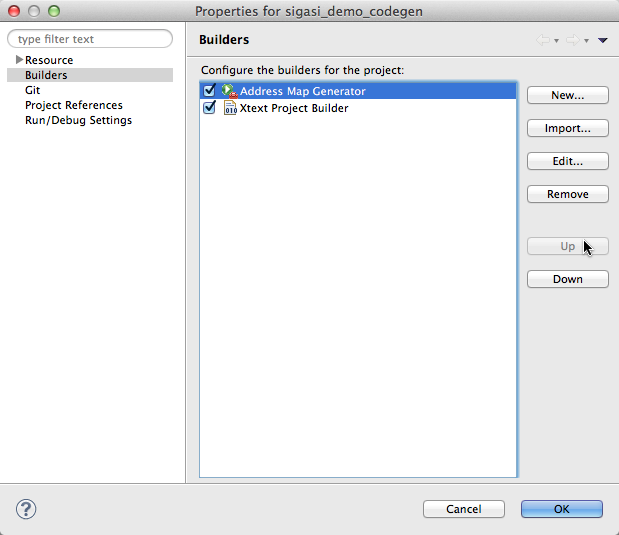 I’m testing the builder by placing my source file and generated file next to each other and editing the source file. Each time I save, the generated VHDL package is update.

If you are using a version control system, make sure you add the new .externalToolBuilders directory, and the changes to .project

What do you think?

Did this work for you? Do you have a tool that you can recommend for generating the address map?

Set up your code generator in Sigasi