Many IDE’s have a project descriptor file that you can double click to open that project. If you want your colleagues to open your project, all you need to do is make sure that they have the IDE installed, and ask them to double click the project file descriptor.

Until now, things were not that easy with Sigasi. You needed to set up a workspace and import a project. Not that much work, but still a lot more complex than just double-clicking. Until now, that is, because the latest release (Sigasi 2.13) allows you to import an open a project from the command line. We can use this feature to create a clickable script (and thus: an icon in the project directory) that will open the project.

How to do it

First, make sure that the executable sigasi.exe is on your path.

Now, create a file named sigasiproject.bat in your Sigasi project:

Now, you just have to double-click the BAT file to import and open the project in your Sigasi workspace!

Note that importing does not mean that your project is copied to the workspace directory. It only means that the workspace knows that you want to work with this project. 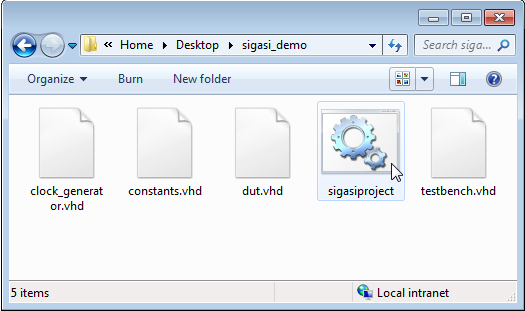 Linux and Mac users will have no trouble translating this to their own platform. I know you guys are smart. Think along the lines of:

This is not an officially supported feature. I’m writing this information “as-is”, hoping that it is helpful.