In earlier posts, I have explained that there are basically three ways of how to organize your VHDL code within your Sigasi environment. As a reminder:

What is a reusable project?

If you have a set of VHDL files, which may include packages, entities and architectures, we will call this a reusable project. The files are closely related and serve a single purpose. Often, these reusable projects take the form of an IP library (like the IEEE libraries), or an IP core (like a processor core or a memory controller). If you are working on large projects, such as a System on Chip (SoC) design, you are using IP cores.

Setting it up: STD and IEEE

You can turn off the automatic builder while you are setting up your projects: Project > Build automatically. This will keep the compiler from starting before you have set things up correctly.

In this blog post, we assume that one project is compiled in one VHDL library. You can easily adapt if you have several projects in the same library.

First, we need a project for IEEE and for STD. You could put those in a single project, called default libraries or something along those lines. But I prefer to stick to the rule of one project for one library. Just create a new VHDL project called STD, and remove the IEEE folders from that project. Next create a project called IEEE and remove the STD folders from that project. Now you need to make IEEE depend on STD: Project > Properties > Project References and select STD as a project reference for IEEE.

Adding your own libraries

Now that you have the first two libraries, it is time to add your own library. Select File > New > VHDL Project. Clear the Use default location mark and select the location of your library. Choose the library name (we’ll use my_lib for this example) as your project name and click Finish. Now, perform the following four steps:

As you add more and more projects, your projects will depend on each other too. Make sure you set the correct dependencies in step 1. You have to make project dependencies explicit in Sigasi. This may seem like a bit more work, but is also helps you keep a clean and clear project structure.

Don’t forget to turn the autobuilder back on. Project > Build automatically 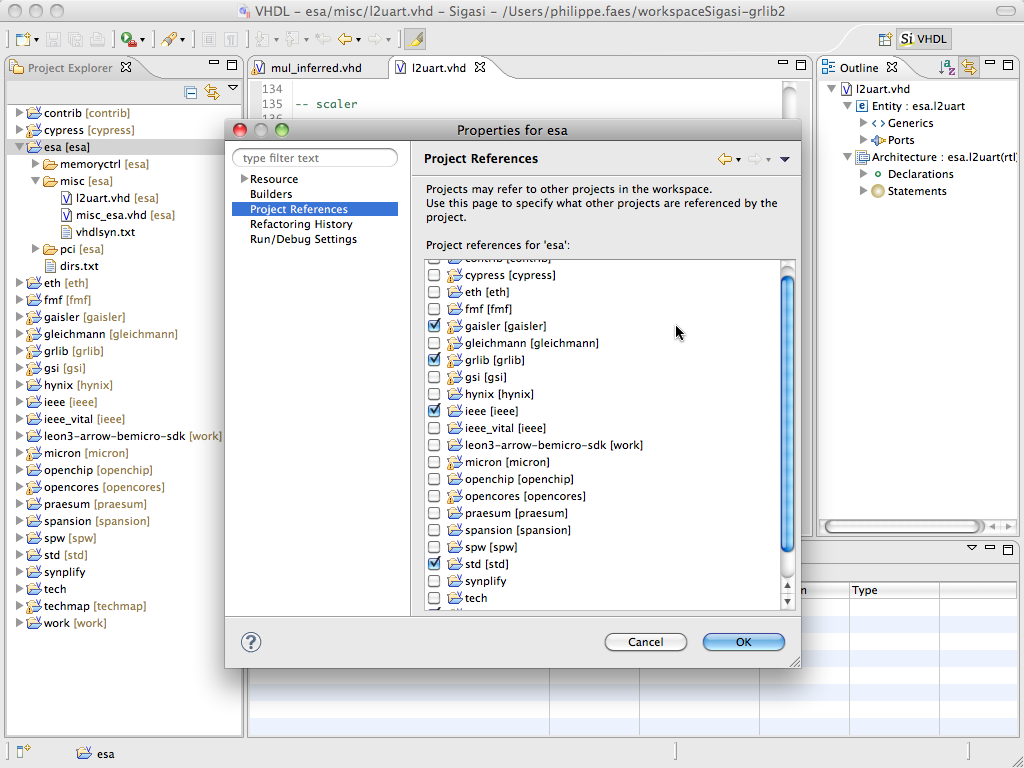 This is a robust way of organizing large projects. Setting projects up takes extra time, say about half an hour for larger projects. Having separate reusable blocks in separate projects makes it easier to work in teams and to deal with third party IP.

If you are working on a serious industrial design, with reusable in-house IP and/or third party IP, we would recommend the one IP block per project approach. We especially recommended it for any mid or large scale project, or:

To show you an example of how to get started, I have created a video where I set up the first few libraries in the open source GRLIB collection. You can also download a zip file with all the GRLIB libraries (and a few of its example designs). Use File > Import… > General > Existing Projects into Workspace. Then Select archive file, Select All and click Finish. Importing and compiling everything will take a few minutes.

One IP block per project