Posted on 2021-06-22 by Wim Meeus
Tagged as: documentationVHDLSigasi Studio

This article discusses documentation of Hardware Description Language (HDL) code, and how Sigasi Studio can help with that. Designers (and their managers) generally agree that well documented code is important. In practice, actually documenting code, documenting code well, and keeping documentation up to date doesn’t always happen. The excuse is often time, as in we didn’t want to spend extra time or we didn’t even have time to write documentation (but a few months later we spent much more time tracking that one bug while reverse engineering our own code…) So before getting into the how of documentation, we’ll first revisit why good documentation is important.

Good code is self-documenting, now what?

Good documentation is important, but there’s a saying that good code is (or should be) self-documenting. So how about that? How can code be self-documenting, and is that enough? Self-documenting code is indeed a Good Thing. With this term we denote the use of programming techniques to make code maximally understandable without further explanation. This includes:

Writing your code this way makes it easy to understand what the code does. It does not document why the code does what it does, nor does it give high-level information of how to use the code. This is where further documentation is needed.

Where shall we put the documentation?

Documentation can be added to code either in a separate document, or as comments in the code. The latter approach is particularly interesting in many cases, because:

In some cases, a separate document is useful too. A customer using your IP block, for example, may need the information about your IP block but they don’t get access to the code. Or you may want to collect all the documentation in one place, which is easier to read than when it’s mixed up with the code. Fortunately, tools (like Sigasi Studio) exist to extract documentation from comments in code, so you won’t need to write the documentation twice.

How to write good comments

Ideally, what we want is the best documentation with the least possible amount of effort. The good news is that, to some extent, these concerns are not each other’s opposite. A few guidelines will help you optimize your documentation effort.

Sigasi Studio, the integrated development environment for digital chip design, helps you write and maintain documentation for your HDL projects. In the next paragraphs, we’ll highlight how to write documentation, and how to view it and export it as a separate document.

Documenting your code in Sigasi Studio

Sigasi Studio Makes documenting easy. It associates comments with the code. The only requirement is that comments are in the right place, usually either on the line(s) before the code they refer to, or on the same line. For example:

No particular syntax for the comments is required, only the placement of comments determines the association. Details are discussed in the Sigasi Studio manual.

Using the documentation while writing code

As soon as these comments are written, Sigasi Studio will pick them up and show them when appropriate, e.g. in hovers. When you place your mouse pointer over an item which has documentation associated, the documentation will be displayed in a pop-up. Consider this entity:

Now we’ll instantiate this entity somewhere else. Wait, what did it do? Place the mouse pointer over the entity’s name and there is the documentation!

These hovers also work with signals, variables, functions, and any item that may have comments associated with it.

Note that some of the text is formatted differently, e.g. drive_rst_start is bold, and rst and start are verbatim. Comments may be formatted using markdown, as we’ve demonstrated in the example. Bold, italics, titles, bullets, coloured fonts, it’s all possible.

From a design file in the Sigasi editor, you can open the Documentation view: right-click in the editor and select Show In > Documentation. The documentation is opened in a separate window as shown below. This view shows the documentation of a single file: design units, tables with ports and parameters, instances, etc. 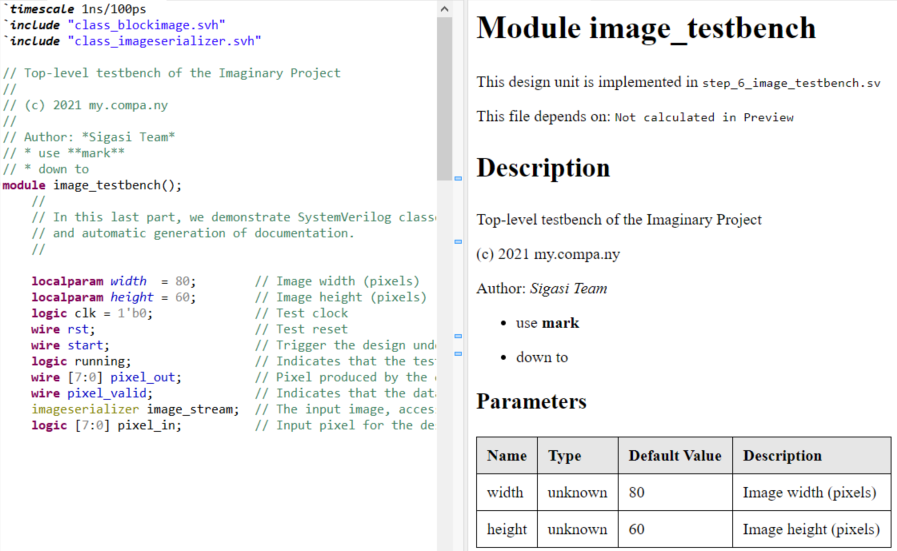 Since Sigasi Studio 4.12 you can customize the CSS used in the exported HTML documentation. All you need to do is add a sigasi-doc.css (example) file in the root of your project. The CSS from this file will be inserted after the styling that ’s added by default. The specifications can be found in our manual.