Sigasi 2.3 brings you the Hierarchy View, which makes it possible to inspect and navigate your design hierarchy.

We have also added two other things that many of you have asked for:

We have written a VHDL elaboration engine for Sigasi Pro. This allows us to also give you feedback about the structure of your design. The Hierarchy View is the first result of this engine. This view shows the VHDL design hierarchy below the selected top level object. 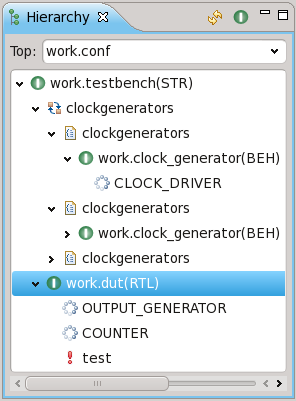 The hierarchy takes generics and configurations into account when computing the design hierarchy and has an interpreter to calculate expressions in generic maps and generate conditions. This interpreter can not handle all expressions yet. Today, it covers basic arithmetic and string operations. This is enough to deal with most, common use cases.

Note that if you perform an update, the Hierarchy View will not open by default. The easiest way to enable it is to click Window > Reset Perspective….

Sigasi now checks your VHDL files for unused signals, constants and variables. We also implemented a Quickfix which can automatically resolve the warning by removing the unused declaration. To trigger a quickfix, click the problem marker (annotated with a lightbulb icon) and select the quickfix. You can also trigger the quickfix by putting your cursor on the unused declaration in the editor and pressing Ctrl+F1.

It is confusing to read a design that contains ‘dead code’. This new feature will make it easier to detect and remove it.

This feature makes enables you to configure Sigasi as default editor for other EDA tools (Opening Files).

Because the internal cache format has changed in this release, your projects will be cleaned automatically after this update.

Sigasi 2.3.1 brings a quick-fix for unused declarations. If your code contains undeclared variables or signals, Sigasi can now automatically declare them for you. We also further improved the Hierarchy View, added the official VHDL 2008 libraries of IEEE and implemented several improvements and bug fixes.

Sigasi now contains a quick fix for undeclared identifiers. If you assign a value to an undeclared signal, Sigasi will present a quick fix to declare the signal for you. With a heuristic Sigasi guesses the datatype and automatically adds the declaration to the correct declarative part. We reused our template mechanism for this, so you can easily make changes. Hit tab to switch to the different fields and press enter when you are ready. The cursor will then automatically jump to its original position, the location where the signal is used. This also works for undeclared variables.

An undeclared identifier could also be a typo. If the undeclared variable closely matches an existing declaration, Sigasi will also offer a second, alternative quick fix to simply fix the typo.

We can now ship the standard VHDL 2008 libraries with Sigasi. This includes both the STD and the IEEE libraries. Thanks IEEE!

To use the VHDL 2008 libraries in your project, follow this procedure:

Thanks to your feedback we further improved the Hierarchy View: 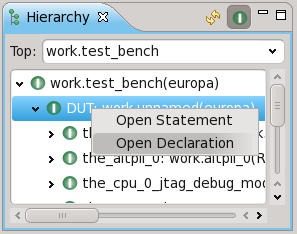 After you update, all caches will be cleared. Your initial build will take a longer than usual.

If you have Sigasi 2 installed, you can Update Sigasi . You can also Download the Latest Version of Sigasi .